Why the BOBble Head? 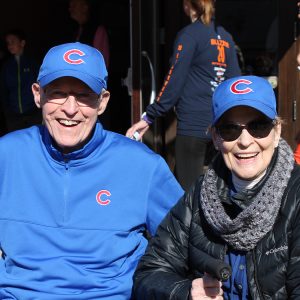 For more than 50 years,  Bob Blazier, former president of the Crystal Lake Chamber of Commerce, has lived and breathed Crystal Lake. He has developed deep roots from more than two decades with schools in Crystal Lake Community Consolidated Elementary School District 47, his work with the Northern Illinois Medical Center, and more than a decade at the chamber.

“A lot of the things I do are community-oriented,” Blazier says. “I have a strong feeling that this community has been very good to me and to [my wife] Rosemary and my family. So one payback I can make is to be involved in the community.”

An athlete, he attended Western Illinois University on an athletic scholarship. He played defensive end on the football team. He also met his future bride, Rosemary.  “She was homecoming queen,” Blazier said. “I was president of the student senate.” They married a week after graduating in 1949. They have been married for over 70 years!

In 1962, Bob was hired as the principal of Lundahl Middle School, Rosemary was hired as a physical-education teacher at Central Elementary and Junior High School (now Husmann Elementary School). After three years as principal, Bob moved to the newly created position of assistant superintendent for instruction in District 47. He became district superintendent in 1973 and joined the Crystal Lake Chamber in 1974.

Blazier’s work with the chamber has led him to many other community endeavors, including being on the board of the Centegra Health System’s foundation, Healthbridge Fitness Center, McHenry County College’s foundation, the Hospice Foundation for Northeastern Illinois and Raue Center For The Arts.

Did you know that The Bob Blazier Run for the Arts actually predates Raue Center itself?  When a 5K charity run in Bob’s honor was proposed during a Chamber of Commerce dinner 24 years ago, Bob was given an opportunity to name the charity of his choice.  Being a member of the Civic Center Authority, a group instrumental in the formation of Raue Center, Bob chose Raue Center as the beneficiary.  Those early runs helped raise much-needed funds for the restoration of Crystal Lake’s downtown movie theater, a structure that had stood since 1929 and would reopen in 2001 as Raue Center for the Arts.  Since then the “Blazier Run” has become a signature fundraising event for Raue Center and a great way to honor one of Crystal Lake’s true champions!

For the past 7 years the Run’s fastest man and woman, as well as the winners of our Team Challenges, have taken home a coveted Bob-Bobble Trophy.  Created by the Amazing Bobblehead company and featuring the likeness of Mr. Crystal Lake himself Bob Blazier, these whimsical trophies have become true Crystal Lake collector’s items!