BE A PART OF OUR STUDIO AUDIENCE!
Raue Center is excited to announce something NEW to their fall lineup. Come be a part of a LIVE studio audience! Every Wednesday at 7PM, for $10 you can get the experience of a “Lucy’s At Home” taping with amazing comedians from comedians from all over Chicagoland! Book your spot today for an upcoming taping by calling the Box Office at (815) 356-9212. 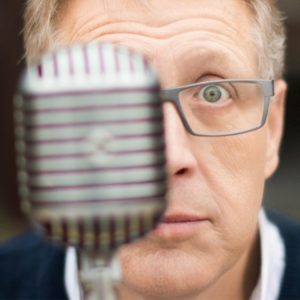 Radio personality, John DaCosse, curates Lucy’s Comedy. During his 30+ years in stand-up comedy, the brilliant John DaCosse has developed a solid reputation nationwide. He has opened for big names like Ellen DeGeneres, George Lopez, Craig Ferguson, and Billy Gardell. John has appeared on NBC, Comedy Central and TBS. Mr. DaCosse has also served as an audience warm-up for Rosie O’Donnell and The Oprah Winfrey Show.