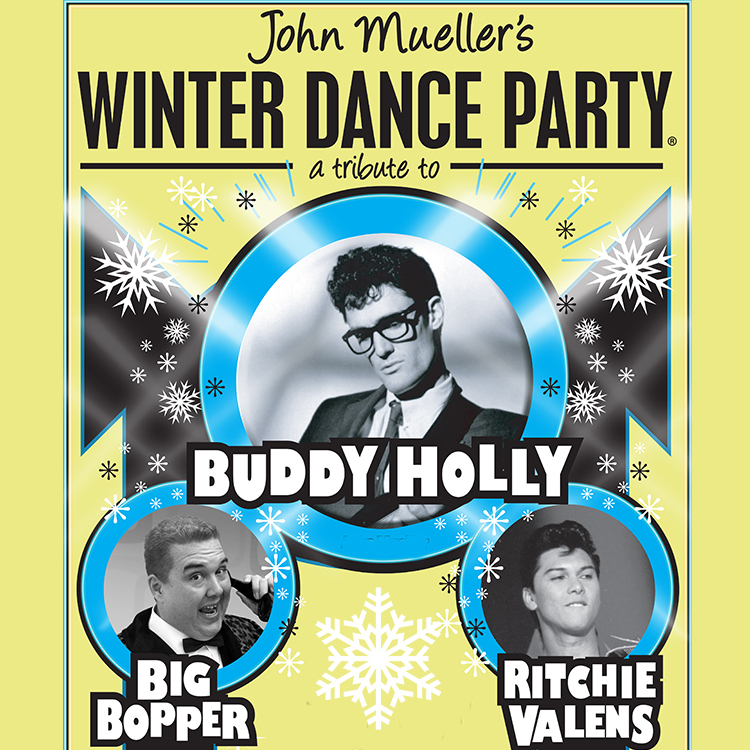 The official #1 tribute to Buddy Holly, Ritchie Valens, and the Big Bopper

John Mueller’s “Winter Dance Party”® is the official live and authentic re-creation of Buddy Holly, Ritchie Valens, and the Big Bopper’s final tour and the only show endorsed by the Holly, Valens, and Richardson estates. Each live concert performance includes over two hours of unbridled, high voltage entertainment featuring all the hit songs of the 50’s era: That’ll Be The Day, Peggy Sue, Oh, Boy, Rave on, La Bamba, Chantilly Lace, and many, many more.

The Winter Dance Party show has performed in front of over 2 million people on national TV for the Jerry Lewis Telethon, has toured extensively throughout the United States and Canada at theatres, performing arts centers, ballrooms, corporate events, casinos and even for the Rock and Roll Hall of Fame along with John Mellencamp, Marshall Crenshaw and others.

It is the only show endorsed and honored by Buddy’s widow Maria Elena Holly.

Highlights over the years have included performing with Grammy-winner Peter Nero and the Philly Pops Orchestra, receiving the keys to the city of Green Bay, WI from the Mayor, playing in the legendary Surf Ballroom on the same day Buddy, Ritchie, and the Big Bopper did 50 years prior and performing on stage with Maria Elena Holly (Buddy’s widow), Niki Sullivan (an original Cricket band member) and Tommy Allsup (original Winter Dance Party guitarist and legendary Nashville producer.)

The show also performs with full orchestration for symphonic pops concert presentations and has performed with the Detroit Symphony, the Columbus Ohio Symphony, the Jacksonville Florida Symphony, the Grand Rapids Michigan Symphony, the Philly Pops Orchestra and many more.

“Flawless….rings as clear and true as a chord from a Fender Stratocaster.”
-The Chicago Tribune

“An airtight band with energy-packed execution of a long string of classics. Rather than museum pieces or mere fodder for oldies radio, these songs had all the vitality and punch that they carried 50 years ago.”
-Springfield State Journal-Register

*Additional fees and restrictions may apply. Prices may vary depending on zone. Student tickets must be purchased through Raue Box Office (not available online). Please note, a $7 facility fee will be added to all orders.