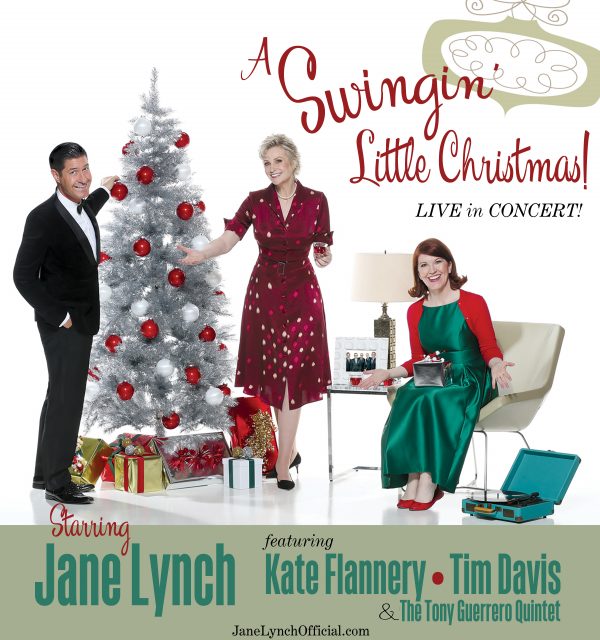 JANE LYNCH is an Emmy and Golden Globe winner for her portrayal of Sue Sylvester on Glee and she is currently the two-time Emmy Award-winning host of NBC’s Hollywood Game Night. In 2015, Jane embarked on her own live concert tour, See Jane Sing with Kate Flannery, Tim Davis and The Tony Guerrero Quintet. Their holiday album, A Swingin’ Little Christmas is available from iTunes, Amazon and other outlets.

KATE FLANNERY is best known for her 9 seasons as Meredith the drunk on NBC’s THE OFFICE.  Recent TV appearances include THE NEW GIRL, AMERICAN HOUSEWIFE, ANOTHER PERIOD and BROOKLYN NINE NINE. Kate is currently Jane Lynch’s sidekick in her anti cabaret act, SEE JANE SING having played the Kennedy Center, Joe’s Pub and 30 cities across the country. Her original cult comedy lounge act, the Lampshades regularly plays comedy festivals and in and around Hollywood.

THE TONY GUERRERO QUINTET has been a staple of the Southern California jazz scene for many years. Featuring Tony Guerrero (trumpet and piano), Matt Johnson (drums), Mark Visher (woodwinds), Dave Siebels (keyboards) and David Miller (stand-up bass), they are currently touring the country with  “See Jane Sing” with Jane Lynch, Kate Flannery and Tim Davis. This past Christmas they released their holiday album “A Swingin’ Little Christmas”, that landed a spot in the top twenty of the Billboard charts. The single “Winter’s Never Cold” (an original Tony Guerrero composition) went to #8 on the Billboard charts. The album is available on iTunes

*Additional fees and restrictions may apply. Prices vary according to zone. No online fees for RaueNOW Members. Special student tickets and pricing only available through the Box Office by calling 815.356.9212

Thank you to our sponsors: